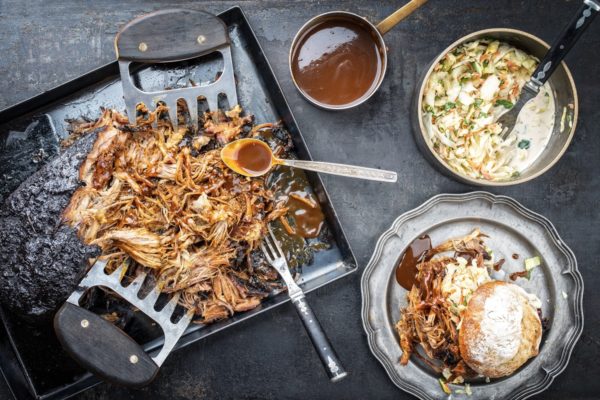 There’s a few different products we have that you can use to create the perfect pulled pork slider.  If you are cooking in an oven, you can keep it as simple as using a BBQ Sauce and adding some liquid smoke (we sell Stubbs Liquid Smoke – $5.50) to create that smoky flavour that you would otherwise get when cooking on a BBQ Smoker.

If using a BBQ Smoker the woods that work well with pork are any fruit woods or Pecan.  Take a look here at our guide to what we have in-stock at the moment

The Boston Butt is a great cut of pork from the shoulder and neck and including the bone.  In the US, butchers tended to take less prized cuts of pork like hams and shoulders and pack them into barrels for storage and transport, known as a butt. This particular shoulder cut became known as a Boston speciality, and hence it became the “Boston butt”. You could also use a Boneless Pork Shoulder or a Pork Neck for a similar result.

If using a rub, simply season the meat all over.  Paul suggests the following products with the boston butt depending on the depth of flavour you are after:

As we have recently received in-stock a new BBQ Charcoal, we decided to showcase cooking on a Weber Kettle BBQ.

After seasoning liberally with your chosen rub, set the meat into the BBQ over an indirect heat source.